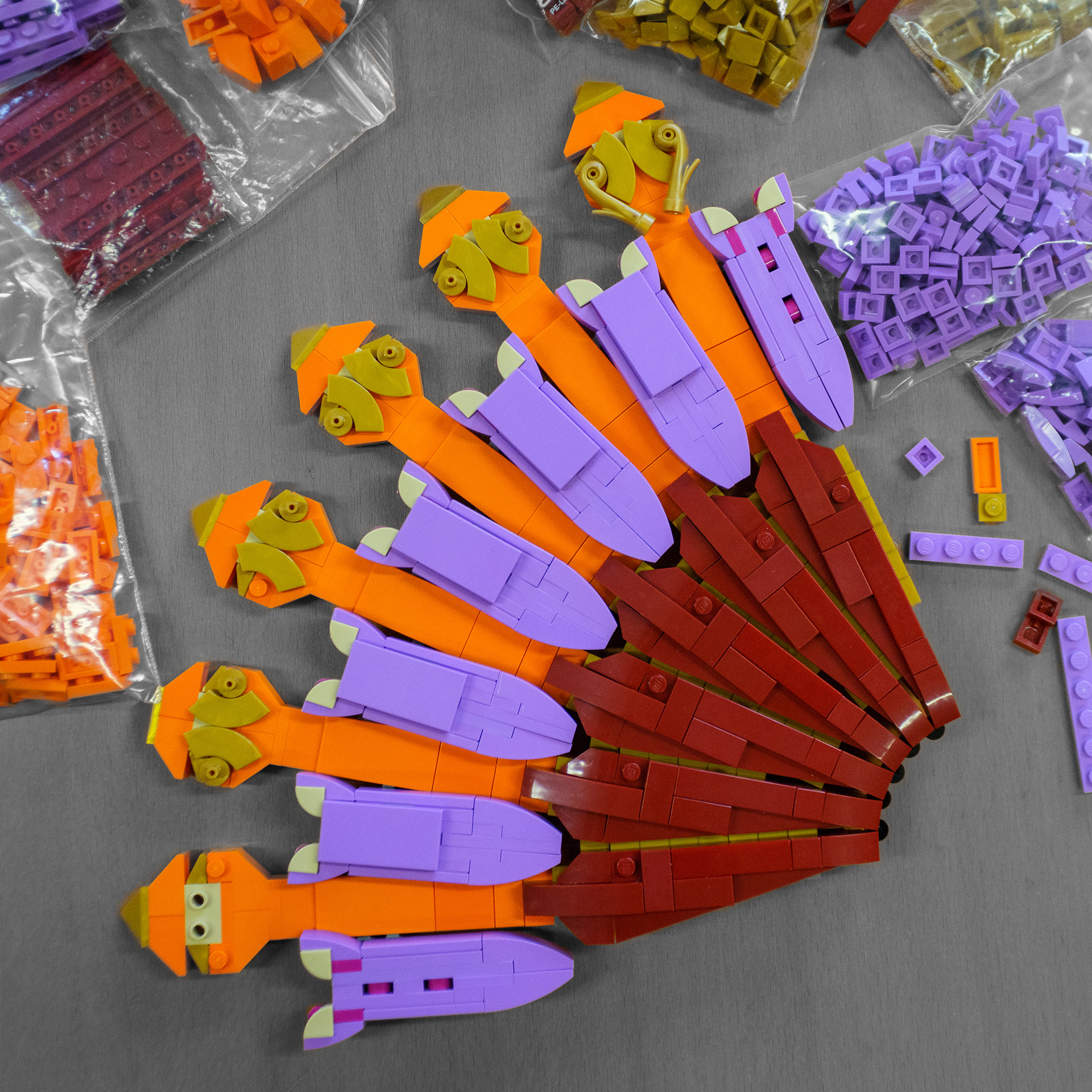 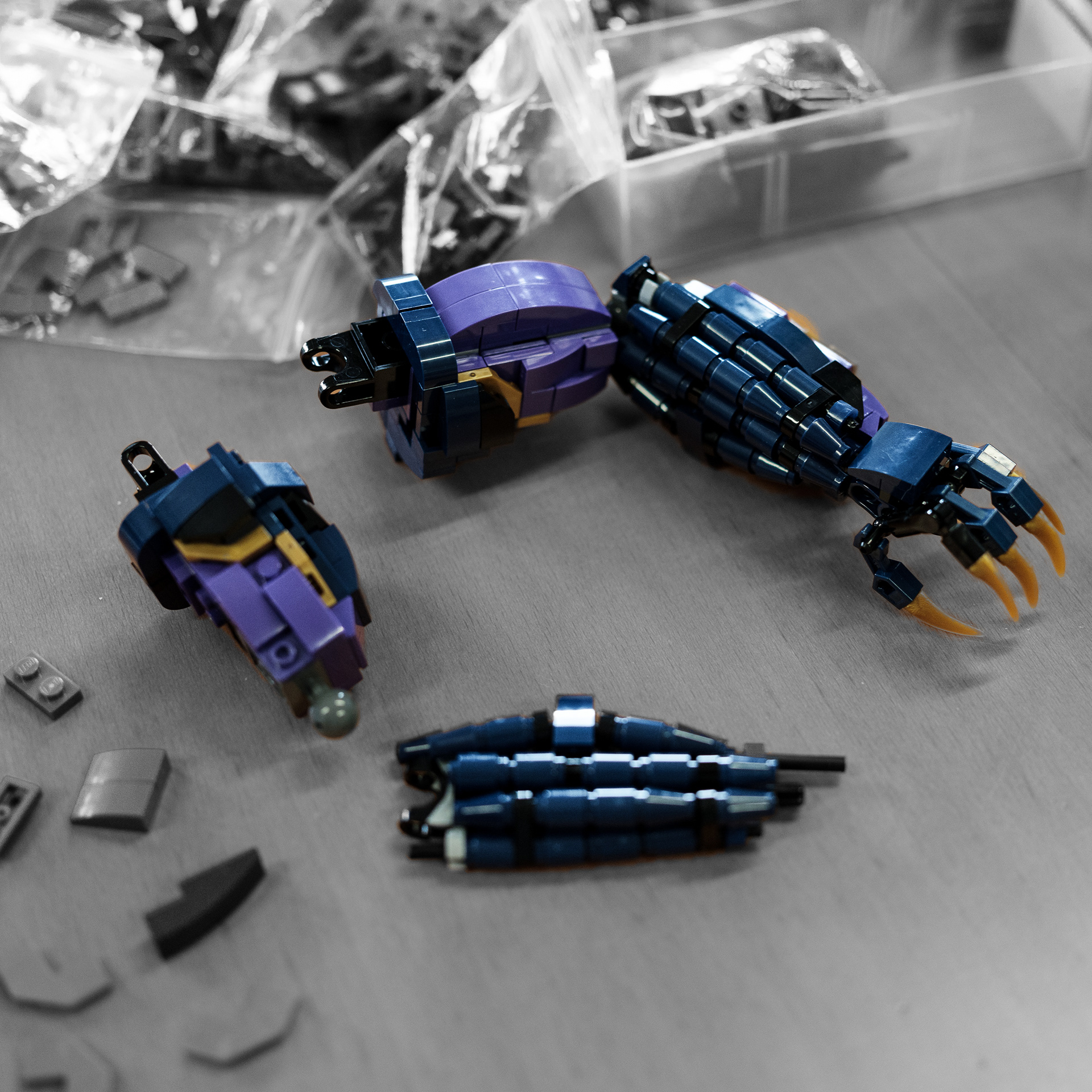 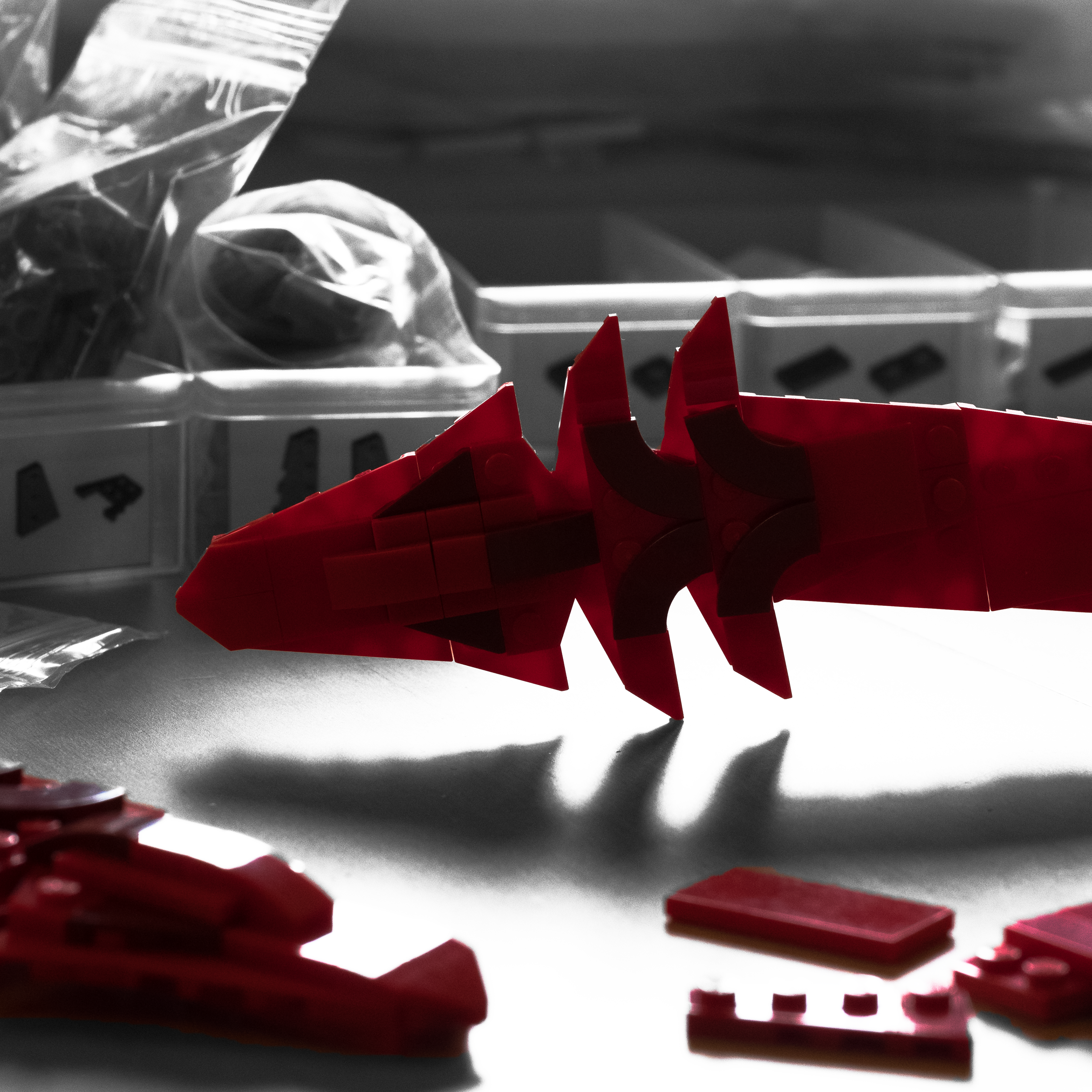 A Journey through Spira
In 1987, when the relatively new game developer Square allegedly faced bankruptcy, designer Hironobu Sakaguchi set out to create a new fantasy role-playing game to save the company. Approaching it as a last-ditch effort for him in the gaming industry he called it "Final Fantasy". Whether that is truly the origin of the name remains a bit of a mystery, but the cultural impact of the game is crystal clear. Becoming Square's and later Square Enix's flagship franchise, the Final Fantasy series has seen numerous entries. Uncommon for the industry, these games weren't sequels. Instead, each had its own story, setting and characters. Hironobu Sakaguchi's name became legendary and he served as the director of the series up to Final Fantasy V and as the main producer up to Final Fantasy IX.

After he switched to an executive producer role, it was the task of Yoshinori Kitase, director of Final Fantasy VII and Final Fantasy VIII, to serve as the director and producer for the next big instalment, which was released in 2001. Being the first Final Fantasy game for the PS2, Final Fantasy X was an enormous undertaking. It was the first game in the series to have 3D backgrounds and voice-acting and it changed a lot about the franchises formulas. But the risks the development team took paid off in spades: Final Fantasy X became one of the best selling games in its generation and is still one of the most highly regarded RPGs ever made.
Having been a fan of the Final Fantasy franchise ever since I first played Final Fantasy XIII, I did not play Final Fantasy X until years after its release. Yet after all this time it still resonated with me like no other RPG did and I wanted to commemorate its 17th anniversary with a special LEGO® monument.
祈り子
([Inorigo]; lit. Child of Prayer)
To understand the beauty and significance of Final Fantasy X, one must first get an idea of the story. The game takes plays in Spira, a world caught in an endless cycle of suffering. A beast called Sin regularly brings chaos and destruction and whenever it is defeated, it returns just a few years later. Still, to maintain peace for at least a brief period of time, the people of Spira train summoners, magicians who can call upon powerful beasts called Aeons (召喚獣), to defeat Sin each time it reappears. The story follows Yuna, a 17-year old summoner who is on a pilgrimage to face Sin, and Tidus, a mysterious boy who claims to come from the long dead city of Zanarkand.
It is revealed much later in the game that Tidus is closely linked with the fate of Spira. Years ago, when Zanarkand faced extinction by the nation of Bevelle, the people willingly sealed their souls into stone, becoming so called Fayth (祈り子). These souls could use their prayers to summon physical manifestations called Aeons. They summoned a dream-version of Zanarkand as well as the beast Sin to protect it and to keep their nation alive for eternity. Tidus is one of the people of Zanarkand and thus not truly alive, but only summoned as a reflection of his former existence. More than a thousand years later, the war between Zanarkand and Bevelle is long forgotten and the eternal existence of Sin has lost all meaning. Yet the Fayth still summon it, unable to stop their prayers. Tired of a millennium of existence, Bahamut, one of the Fayth, sends Tidus to aid Yuna to stop the summoning and give Spira a future free of the burden of the past. Yet Tidus knows that this would also cost his own existence. And as he fades away, sacrificing himself for Spira, it is Yuna who must endure the loss of the boy she loved. It is the juxtaposition of the pain inflicted by both permanence and loss, displayed on a personal level with Tidus and Yuna and on a grand level with regard to Spira itself, which makes Final Fantasy X such an emotional game. It certainly constitutes a milestone in the franchise, which deserved a fitting LEGO® creation.

召喚獣
([Shōkanjū]; lit. Summoned Beasts)
When I decided which motive I wanted to build in LEGO® I picked Bahamut without giving it a second thought. Even though the winged beast has appeared in different variants in almost all Final Fantasy games, in Final Fantasy X he is also a central figure of the story. Bahamut himself is actually a young boy who's soul was turned into a Fayth. Serving as a spokesperson for the Fayth, it is he who sends Tidus on his journey to bring about his own demise. Since the boy only exists as a soul, Bahamut's physical manifestation takes the form of a winged dragon. This Aeon can also be summoned by Yuna and is one of the most powerful in the game. Out of all incarnations of Bahamut, the one in Final Fantasy X is my favourite.
Even more so than his role in the game, Bahamut's appearance makes him such an interesting model to build. All the Final Fantasy games up to Final Fantasy IX have featured a European interpretation of a "fantasy" world. So while some featured a more sci-fi or cyberpunk aesthetic and others a more medieval design, all were shaped by a clearly western art style. For Final Fantasy X, Yoshinori Kitase and Art Director Yusuke Naora wanted to expand the realm of design influences and the game therefore features a setting inspired by Southeast Asia. This is not only reflected in the world, which takes inspiration from the countries in the South Pacific, but also in the characters. Yuna, for example, wears a dress reminiscent of a Japanese Kimono and holds a staff similar to a Khakkhara. This design philosophy also applies to Bahamut, who for the first time features a wide variety of colours. While his main body is mostly dark blue (Colour-ID 63) and dark purple (89), his wings shine in red (5), orange (4), medium lavender (157), magenta (71) and dark red (59) with many ornaments in pearl gold. This makes Bahamut appear very colourful similar to traditional Japanese clothing. He also has four wings instead of just two like his previous incarnations. The back wings feature long red feathers and two giant claws each. The front pair meanwhile forms a half circle mimicking a shining sun. This is fitting considering that the kanji 光 [hikari], inscribed on Bahamut's seal, means "light". This metaphor is further underlined by the golden halo hovering behind his back. 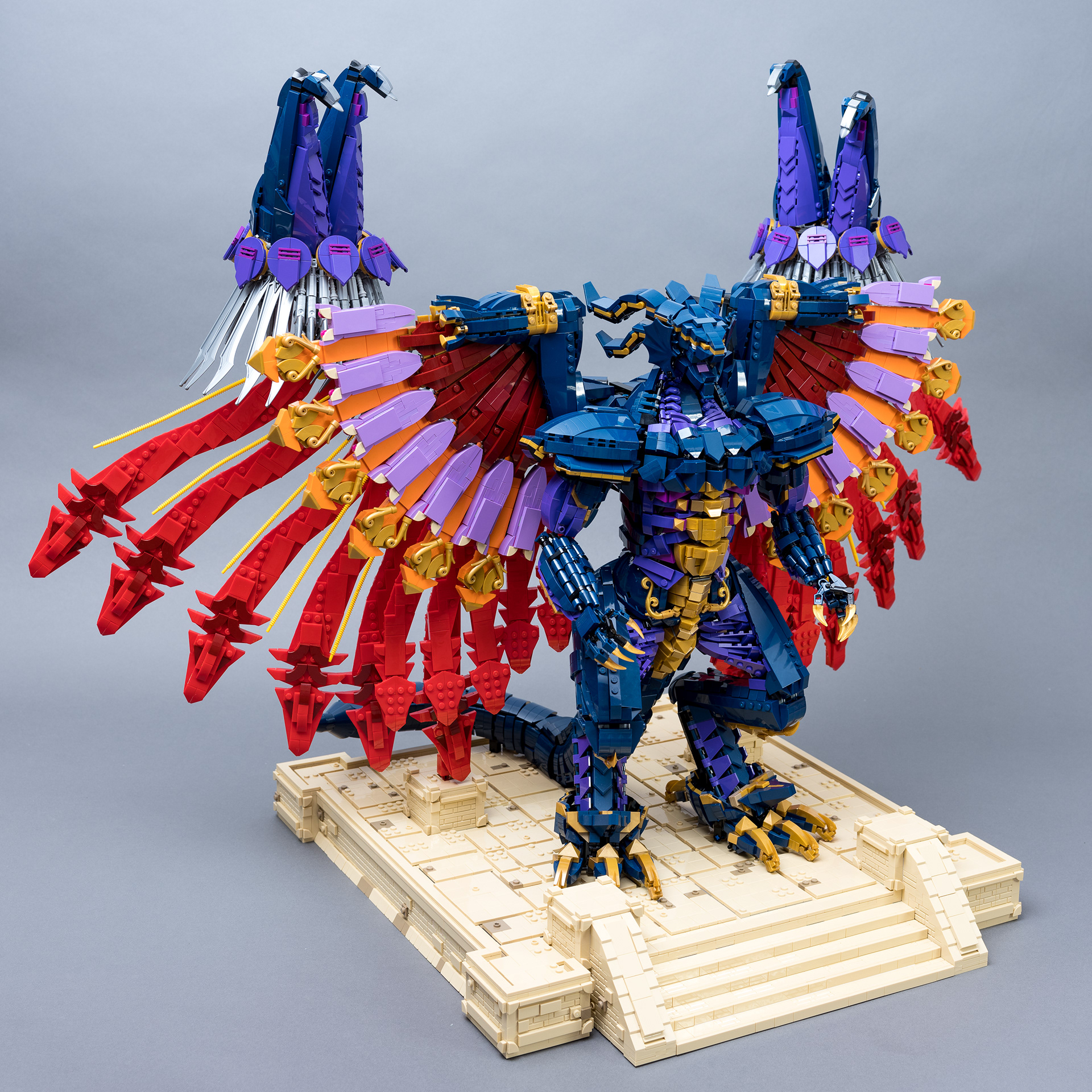 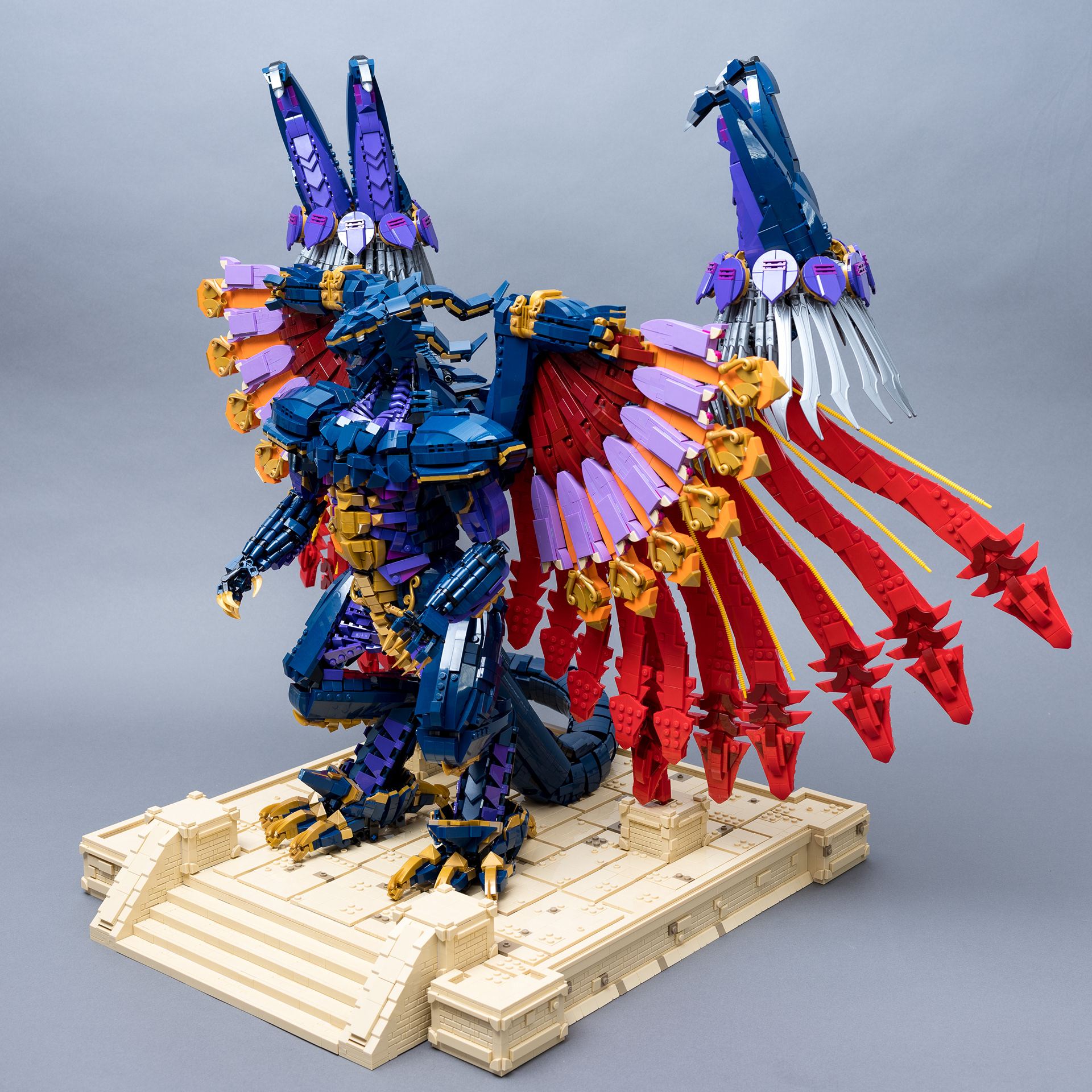 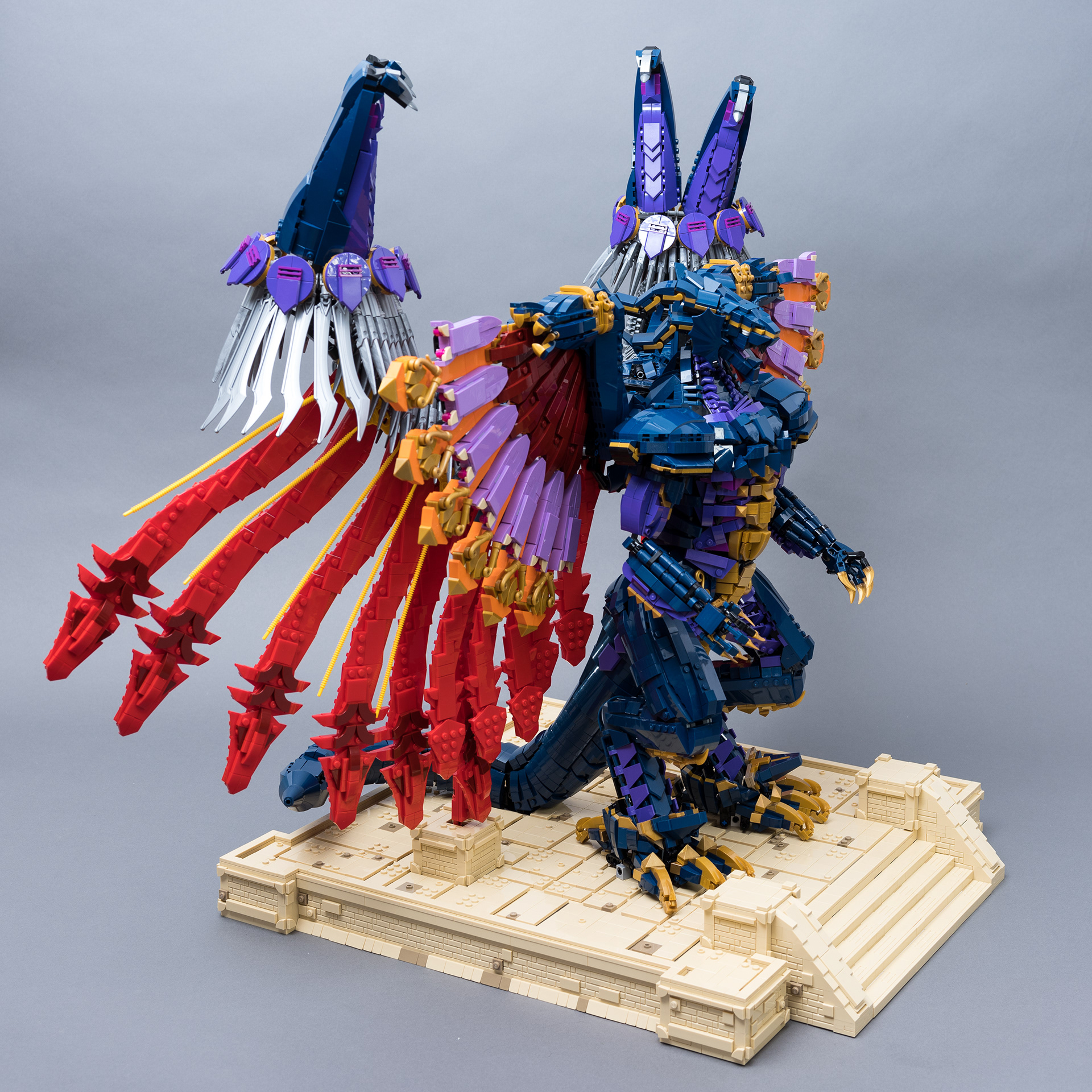 バハムート
[bahamūto]
Converting all of these elements into a LEGO® sculpture required a lot of parts and space. To accurately estimate how big Bahamut would end up being, I first spent many weeks designing his head. I rebuilt it numerous times in an effort to make it as small as possible, while preserving the essential details like his eyes, ears and the four wavy strands. After finishing the smallest version I could design, I calculated the size of the rest of the body. I was still shocked at how large the build would end up being, but I stuck with the chosen scale. Therefore, with a height of 0.8 m (2.62 ft) and a wingspan of almost 1 m (3.28 ft), Bahamut became my largest and most complex LEGO® creation to date.
This also meant that I tackled the project quite differently than most of my other builds. Instead of focusing on specific details, I first spent roughly three months designing the inner frame. Ideally, I would have liked Bahamut to stand completely on his own. But considering the sheer size and weight, this simply would not have been possible. So instead I tried to avoid any visible support structure to still convey the impression of Bahamut standing freely.
Starting with his main body, I knew that his legs would not be able to carry his weight. Thus, his tail serves as an additional support and together with the base and the legs forms a triangle which holds almost the entire model. However, this means that his tail and in turn the entire sculpture is fixed onto the plattform by LEGO® Technic parts. To angle the legs from the hip and bend the knees, I used some of the sturdiest LEGO® hinge pieces (Part-ID 44224 and 44225) which still bend a little under the weight.

Because the inner structure extends through Bahamut's entire body up to the wingtips, I had very little room to build the outer platting and his skin. In order to keep them fairly thin, I used multiple flex tubes (Part-ID 75c02 - 75c63) throughout. These tubes can be bent to give the attached LEGO® pieces an organic shape, while occupying very little space. Still, there were some places where even this technique did not yield sufficient results. His legs, for example, instead have large wedge pieces (Part-ID 42060 and 42061) directly attached to the inner structure to safe space. Similarly, the hinges on his hip were so bulky that I needed to use two Bohrok windscreens (Part-ID 41671) to cover them up as efficiently as possible.
To replicate Bahamut's heterogenous and scaly look I used different techniques depending on the body part. His forearms consist primarily of round bricks (Part-ID 3062b) threaded unto a flex tube, his lower legs use dark purple flags (Part-ID 44676) and his neck uses the arms of minifigures (Part-ID 981982) to achieve an animal-like look.
The final step was building his wings. Thankfully, the front pair is close enough to his main body so that the inner structure can still support it. His back pair, however, spreads too far out and in combination with the claws puts too much additional weight on the build. I wanted the wings to appear like they are not touching the ground, but I needed an additional support point. To solve this issue, I hid a technic beam inside the innermost red feather of both wings. This beam connects the inner structure of the sculpt with the platform and allows the wings to rest on them. To lift the wings up a bit, I included additional pedestals supporting this point which are also mimicked at the front staircase.
If you paid close attention, you might have realised that the model is missing Bahamut's halo. Even though I initially planned to include it, I ultimately considered a clean appearance more important. Since the halo is hovering behind Bahamut's back in the game, it would have necessitated the inclusion of visible support beams in the model. After doing my best to avoid any visible pillars, I did not want to go out of my way to add them for the halo. And even though the halo is an iconic element of Bahamut's design, it is not necessarily what makes him recognisable.
To this day Final Fantasy X is a monumental game in the franchises history and, similarly, this sculpture stands as a testament to this game's impact on me and others. Being the first creature I ever attempted to build with LEGO® bricks, I would not have wanted to build any other character from any other game or any other story, than the mighty Bahamut.
"When it is all over..."

"We will wake, and our dream will end."
- Bahamut
↑Back to Top