Buried under the snow
Guerrilla Games' groundbreaking title, Horizon Zero Dawn, features a great wealth of different facets and designs and I wanted each of my models to depict a different aspect of its world. The Corruptors, are not only some of my favourite designs in the game, but much like the bigger Deathbringers, they play a central part in the story. Knowing the reason for their existence is important to understand the way they look and behave.
They appear completely different than most of the other machines and are immediately hostile towards humans. It turns out the Corruptors are closely tied to the birth of the world Aloy calls home. These machines were created centuries ago, long before any of the known human tribes existed. Originally called "FAS-ACA3 Scarab" they were designed and manufactured by FARO Automated Solutions as independent and self-reproducing war machines. But an ever growing number of robots became autonomous and stopped obeying orders. Unable to contain the swarm, humanity created GAIA, an AI to brute force the robots' deactivation code. Knowing that it would take too long to safe any of the remaining humans, they gave GAIA the means to reestablish life after the apocalypse.
Long after the FARO robots eradicated all life on Earth, GAIA managed to shut them down and after numerous attempts succeeded in terraforming the planet and creating a new generation of humans. At the start of the game these people, including Aloy, are unaware of this past and of the potential danger of the buried FARO robots. So when the first Corruptors are unearthed and start attacking, it is up to Aloy to find out the truth and stop another catastrophe.

In-game model of the Corruptor

Entering the 'Killzone'
Knowing its backstory, it becomes evident why the Corruptor looks the way it does. While the other machines take heavy inspiration from animals and have a colourful design, the Corruptor is clearly a man-designed war-machine. The armour plating, the dark colour and the attached weaponry underline that. All of these years of being buried under the earth have also taken their toll: Many of its cables are exposed, the plating is scratched and dirty and some of its parts appear damaged. All of these aspects add to its menacing and freakish appearance.
Apart from the in-story explanation for the Corruptor's look one can identify another clear inspiration: Guerrilla Games' own Killzone-franchise. The main body of the Corruptor is strikingly similar to the flying A.T.A.C. (Agile Tactical Air Component) vehicle appearing in Killzone 2, Killzone 3 and Killzone: Shadow Fall. Additionally, the colours and many of the details are clearly influenced by the aesthetic of the Killzone games.
There is never any indication that Killzone and Horizon Zero Dawn share the same universe or are in any way related. But considering that the latter was Guerrilla Games' first original IP since the very first Killzone in 2004, I think the design of the Corruptor is a fitting nod to their previous flagship franchise. 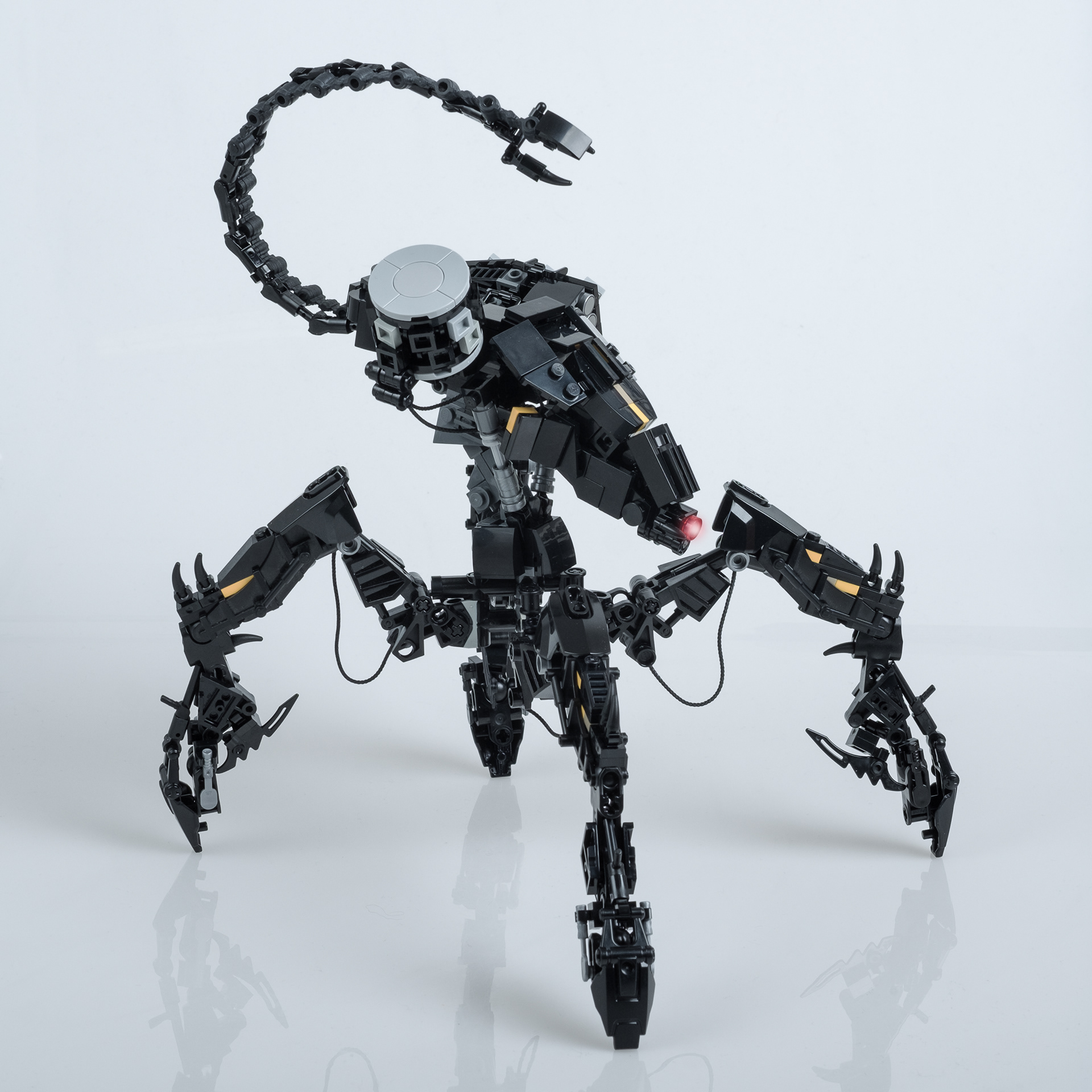 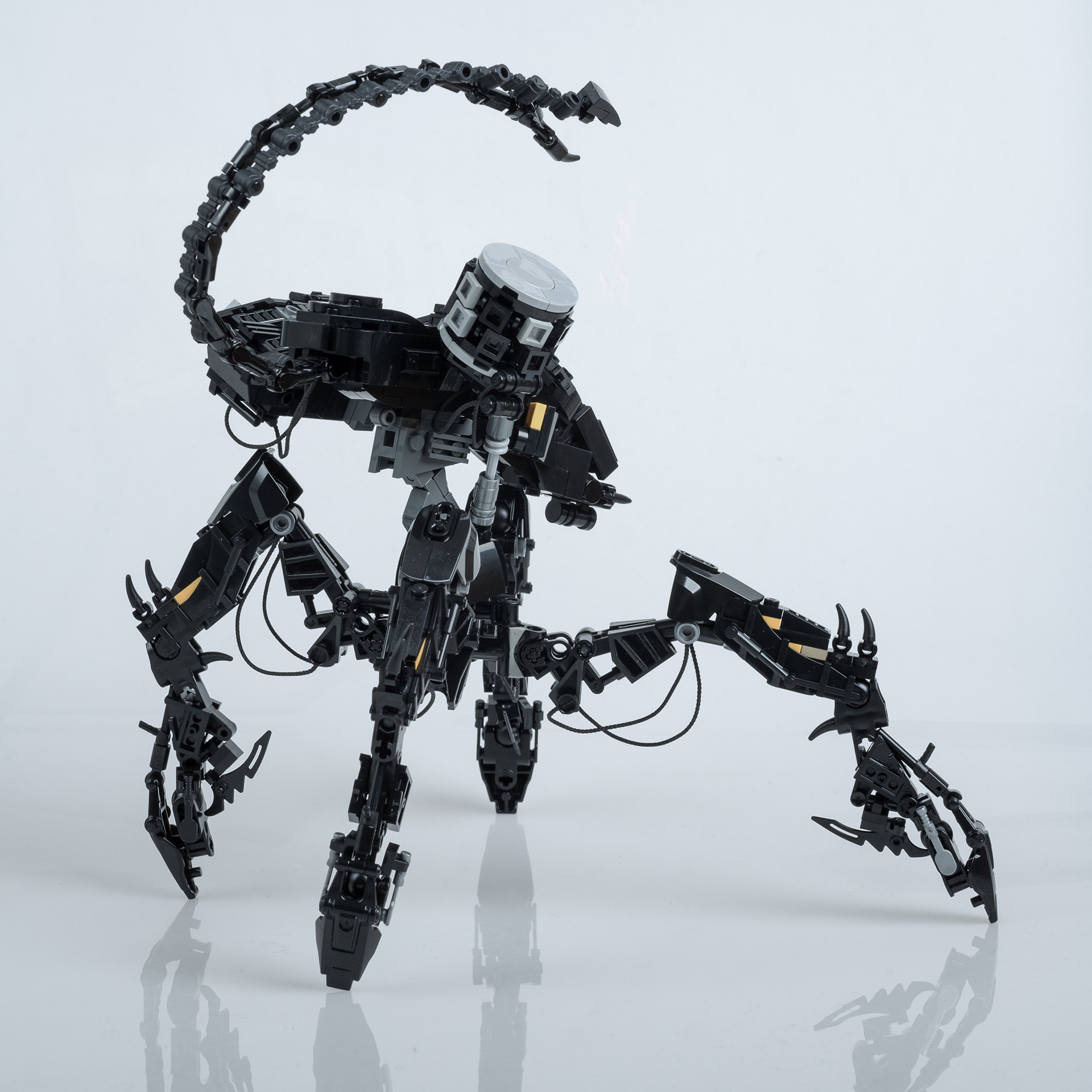 "Machine demons, from beneath the ground? It's a nightmare!"
- Olin​​​​​​​
Out of all the LEGO® models I created so far, I still believe the Corruptor is the best one. I always try to stay as close to the source material as possible, while also creating an interesting LEGO® build in and of itself. And nowhere else did that work as well as with this built, which is partly a pure coincidence. There are some parts of the Corrupter which just look exactly like certain LEGO® parts. The best example are his feet, which are very similar to a Hero Factory shield (Part-ID 92222), or his upper legs, which look like a certain Bionicle part (50920).
Other sections required more creative solutions. The Corruptor's main body uses a lot of hinges and SNOT (studs not on top) pieces to replicate its distinct shape. The rocket pod on the side is similarly complex to allow the rockets to be attached. My favourite design solution, however, is the Corruptor's iconic claw. In the game it can move pretty freely and can attack on its own or throw rocks. To allow for this kind of movability, I used a Hero Factory ammo belt (98567) which is reinforced by multiple clips (48729b and 23443). This allows the claw to bend in almost any direction while being sturdy enough to hold itself in place.
To provide the model with some highlights, I sporadically used some dark tan (Colour-ID 69) and bright light orange parts (110). Additionally, I used light bluish grey (86) pieces to replicate the stripes found on the weaponry. The exposed wires, which are made with string (Part-ID x127c11), complete the look. All in all, designing the Corruptor was one of the most rewarding experiences I had when building LEGO®.

Returning to All-Mother
I first visited Guerrilla Games in 2017 shortly after Horizon Zero Dawn had launched to bring them the LEGO® Thunderjaw I created. In the following two years, I managed to build four more of the iconic machines: The Sawtooth, the Corruptor, the Shell-Walker and the Watcher. Thanks to the amazing Community Team at Guerrilla Games and the studios managing director Hermen Hulst, all of the builds have a new home at the studio.
The team has taken an incredibly bold step with Horizon Zero Dawn, a game fundamentally different from their previous Killzone games. And I am very glad they did. The world and the machines of Horizon Zero Dawn have fascinated me since I saw the very first trailer and I loved to hear from the team, what aspects of the game were intentional, coincidental or sheer bad luck (very similar to building LEGO® in that regard). After all the hard work they put into creating this world, it is wonderful to see that it is being so warmly received and inspires so many fan creations. I am honoured to be among the fans of the game and to have had the opportunity to personally thank the developers for making it all possible.
The models I created from Horizon Zero Dawn still rank high among my list of favourites. They required a lot of patience and creative problem solving to get them right and each time I received incredible feedback from Hermen and the team. I probably would not have tackled more difficult motives in LEGO® would it have not been for their encouragement and love for fan art. And as Horizon Zero Dawn opened a new chapter for Guerrilla Games, the inspiration it gave me defined my love for LEGO® building in a new way and I am very grateful for that.

Insert copy here, which should vary depending on your region. Accept