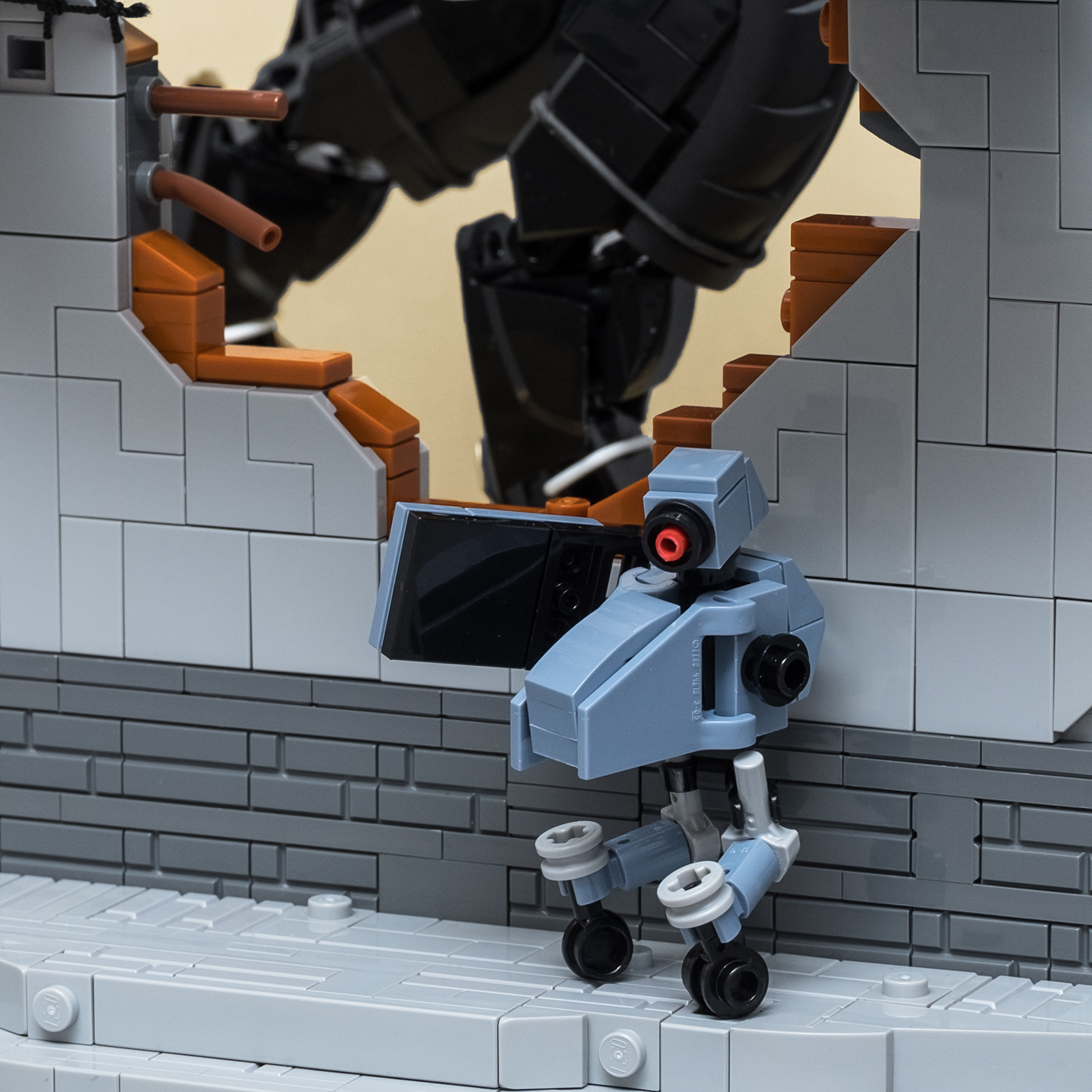 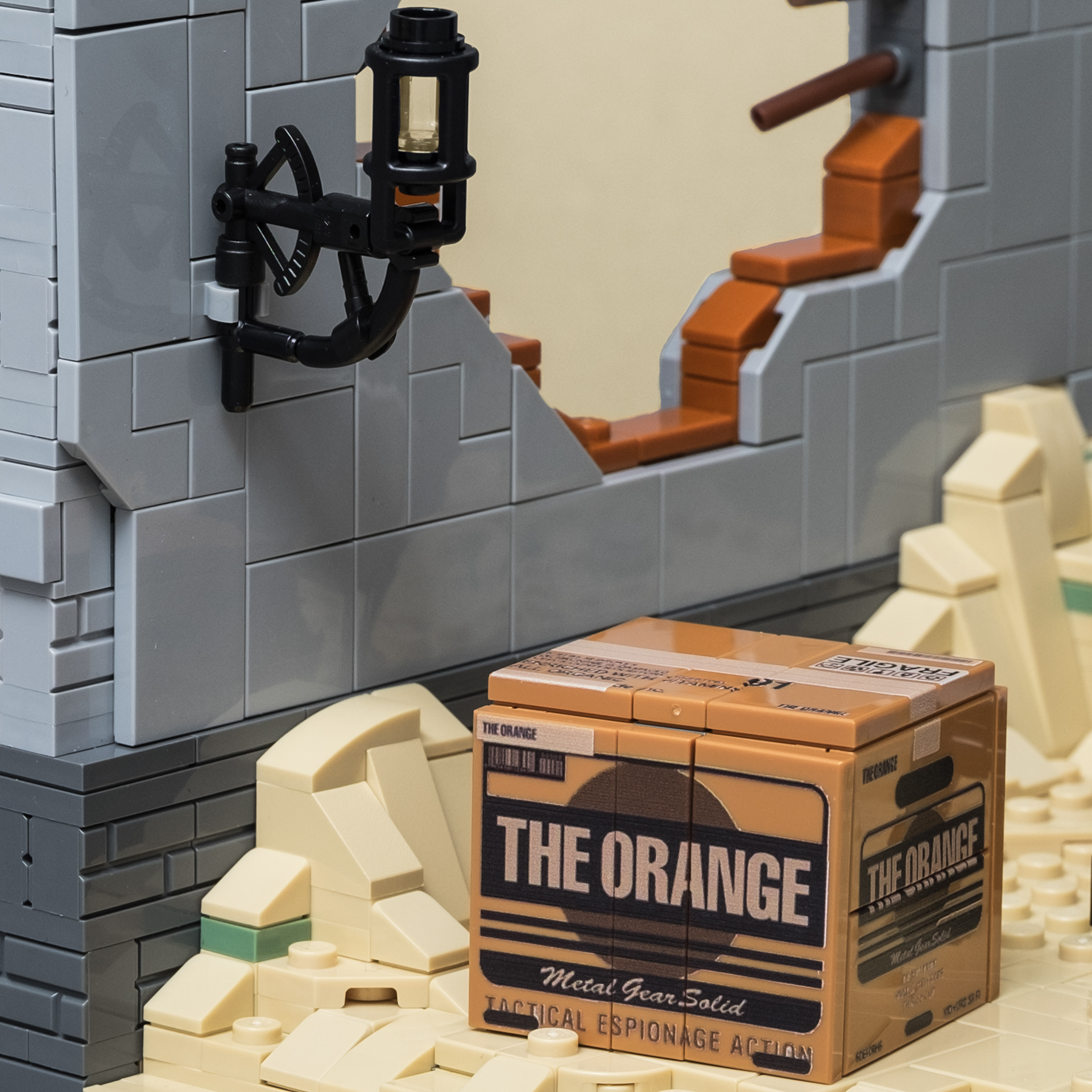 A weapon to surpass Metal Gear
The Metal Gear-franchise has seen countless mech designs over the years. Since Yoji Shinkawa's design of the iconic REX from the first MGS-game, each entry brought with it a new mobile nuclear launch platform, known as Metal Gear. From Ray to Sahelantrophus, each design had its own character, heavily influenced by the game's respective setting and context. Metal Gear Solid 4 was the first game to break that tradition by not introducing a new Metal Gear but instead focusing on a mass-produced combat unit: the GEKKO.
For me, this small bipedal tank represents the peak of the MGS-design philosophy. These games have always been a clash of themes like futuristic warfare, conspiracy stories and the suffering of human characters in an increasingly digital and mechanised world. The GEKKO represents those themes beautifully, by appearing half-human and half-mech. His head and upper body are a clear callback to Metal Gear REX, with its sharp lines and angular design. The legs on the other hand are biological. Not only in shape, but in texture as well: The black pattern evokes the appearance of muscle tissue and the stance gives the legs an almost feminine appearance. 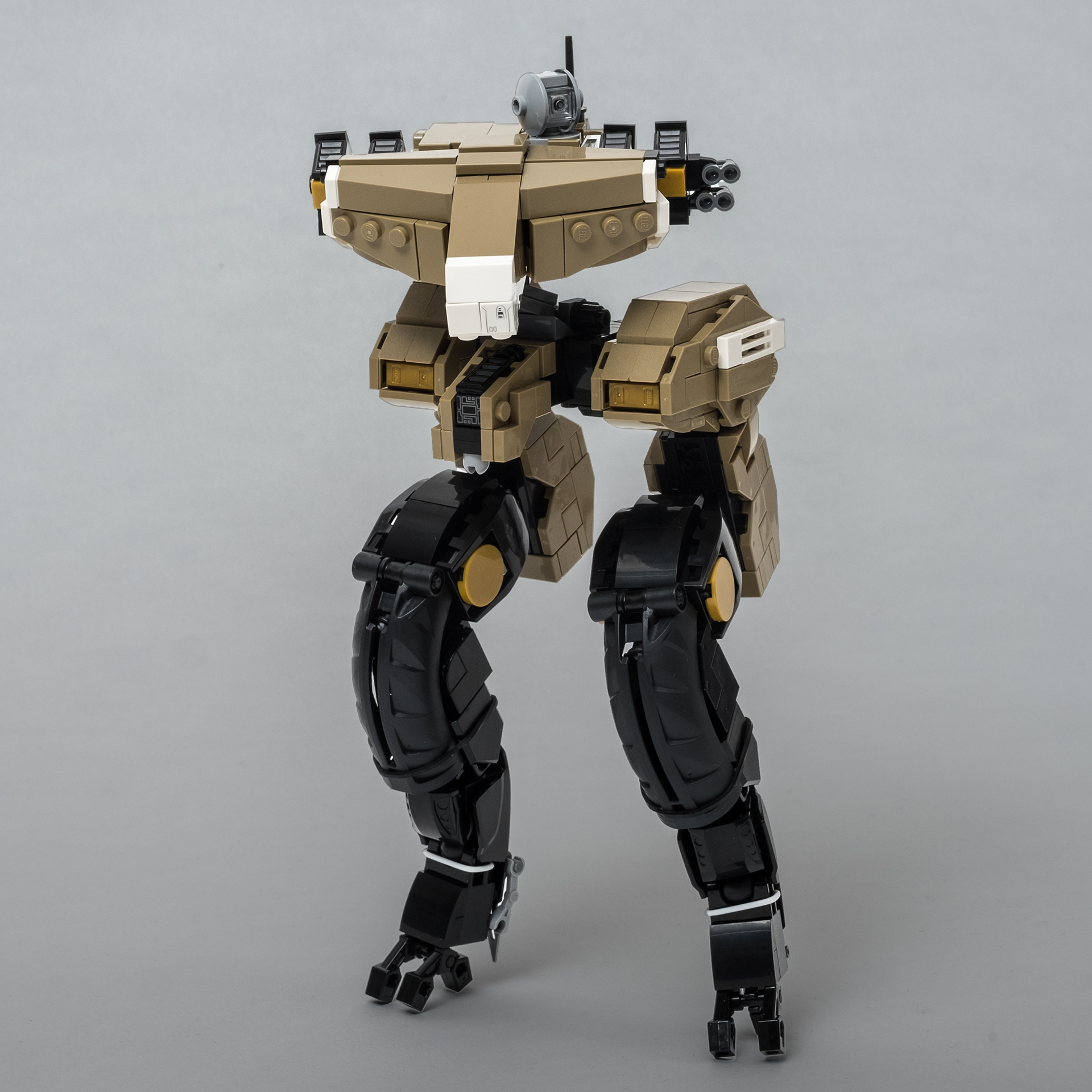 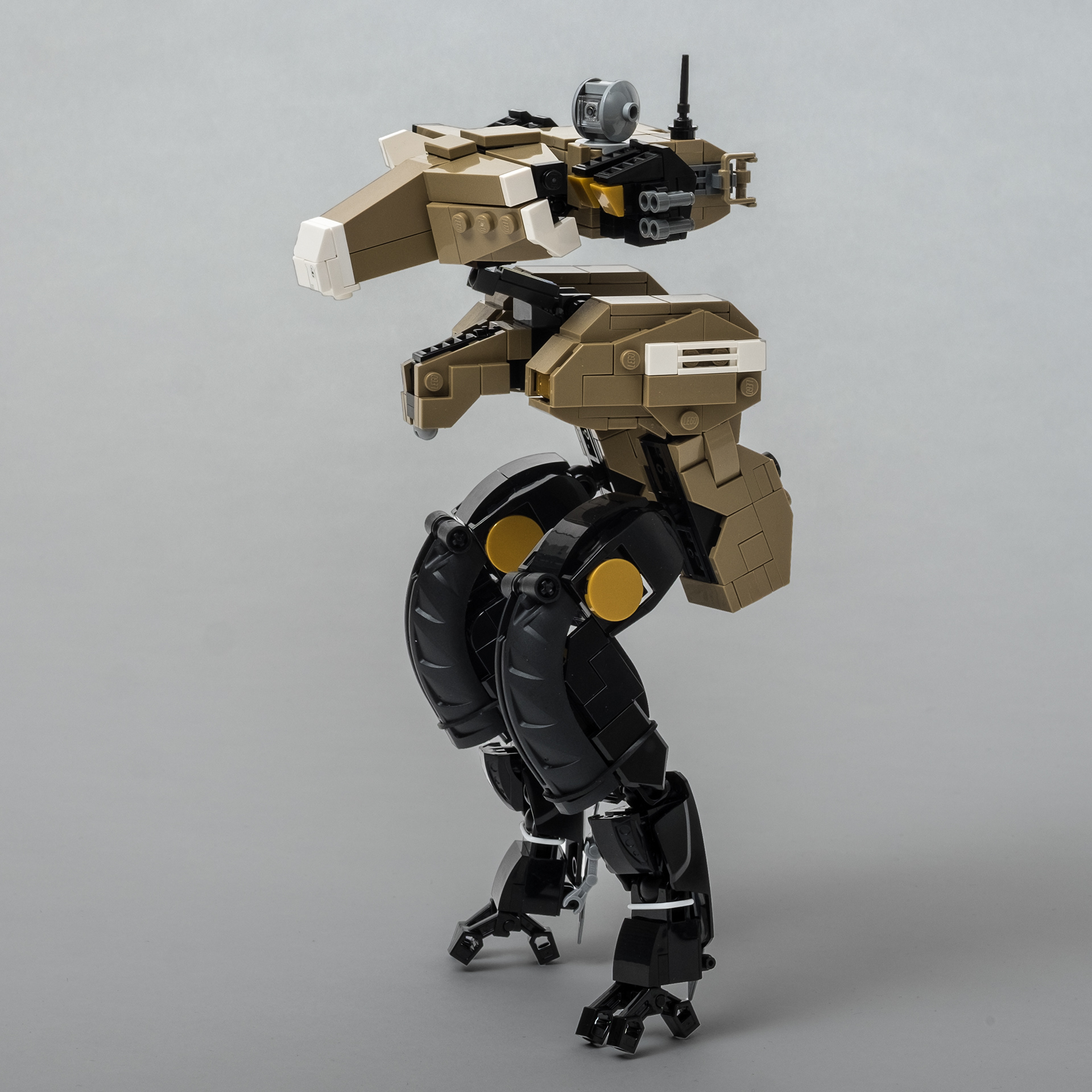 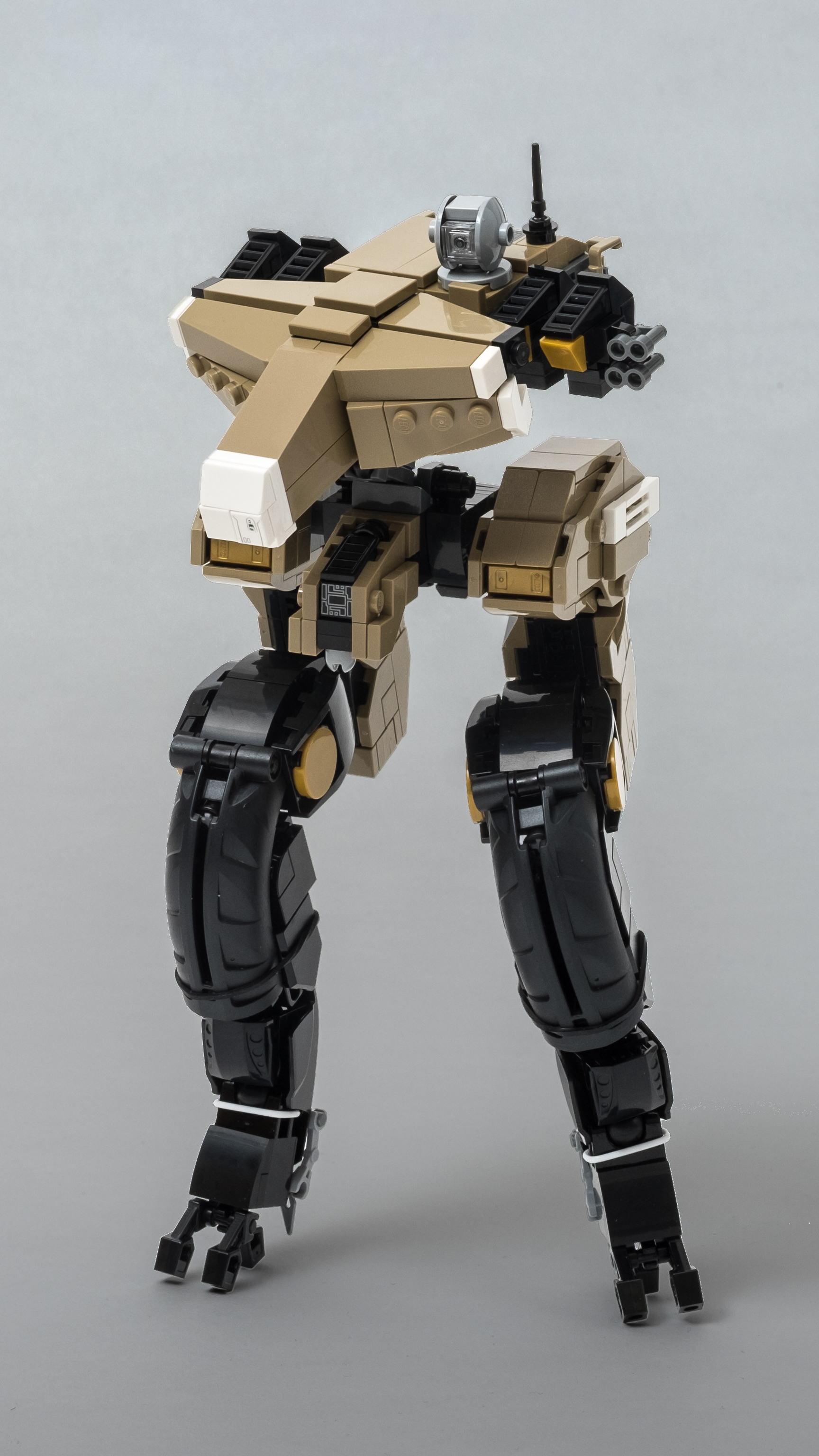 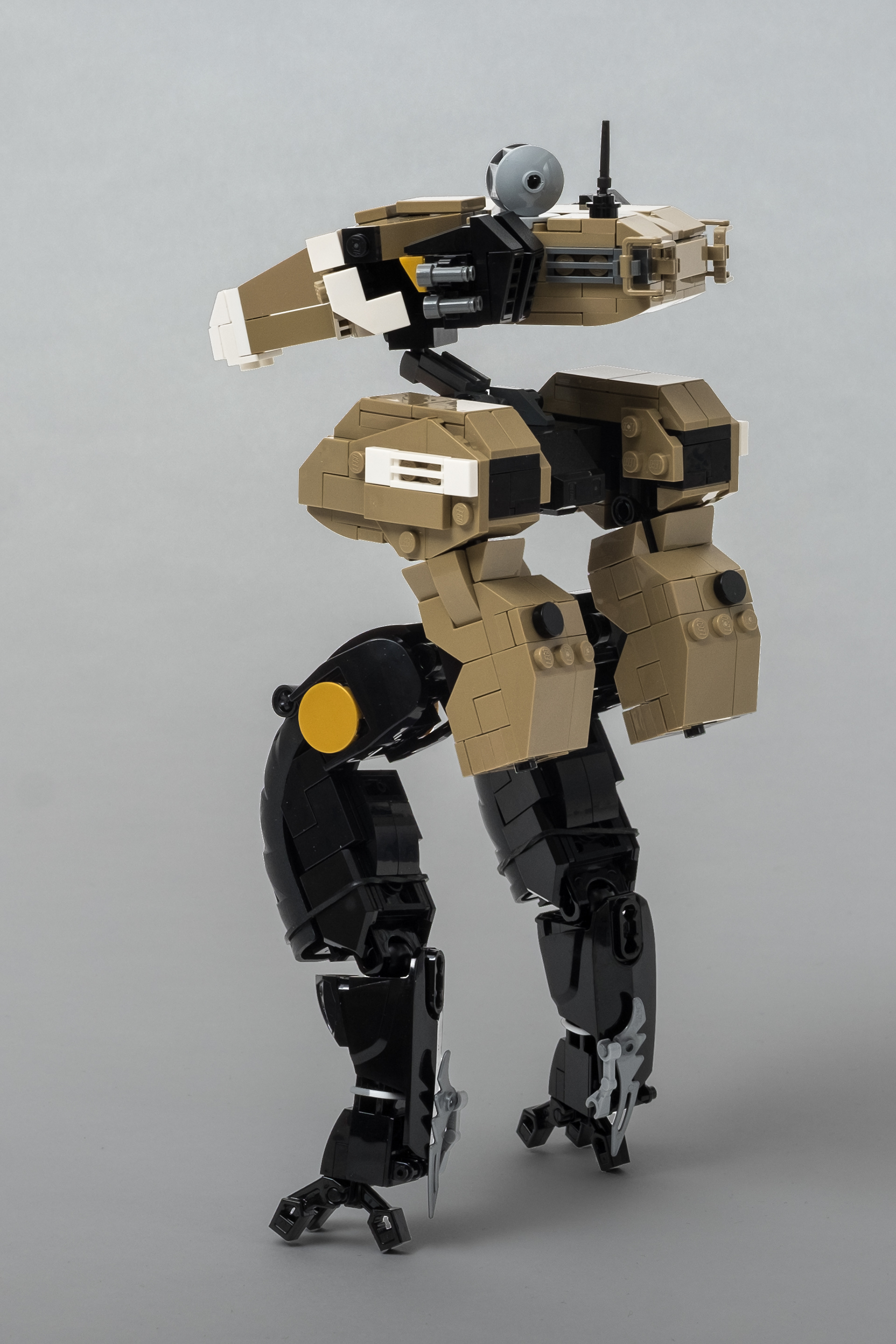 One of the reasons for this design choice was that the GEKKO was to be conceived as a more personal kind of threat than the previous mechs. Instead of being a slow-moving tank, its legs give the GEKKO the ability to be extremely mobile, jump far and high and even kick in a close combat fight. Additionally, it always appears in a group, thus confronting the player in new ways not seen in a Metal Gear game before.
To accurately recreate the difference between the lower and upper body with LEGO® bricks, I decided to use pieces from different LEGO® sub-genres. While the legs are built with mainly TECHNIC and BIONICLE parts (Part-ID 44140) to give them an organic look, the rest of the model is built almost exclusively with SYSTEM bricks. The colour split further contrasts the two sections. According to Hideo Kojima, the GEKKO was designed as an evolution of a modern Humvee or Tank. Therefore, it adopts a similar colour palette. In Metal Gear Solid 4 the player encounters GEKKOs multiple times. In the opening section the mechs have a tan colour (Colour ID 2) scheme, fitting the desert environment, while the ones encountered in Shadow Moses spot a simple grey colour (Colour ID 85). I recreated both variants.
月光
(Gekkō) Japanese for "moonlight"

War has changed…
As already mentioned, the GEKKO is an adaptable combat unit. Throughout the game, the player encounters different versions of the model, each with unique weapons attached to its head. There are some with machine guns, some with rocket-launchers and a few have no attachments at all. This aspect is particularly interesting to build, since it requires designing a main body that is able hold different kinds of attachments.
One unique variant is called the "Suicide GEKKO" and can be encountered in the final act of Metal Gear Solid 4. Instead of weapons this version has two detonators attached to both sides of its head. These have a gun-like design and combined with the GEKKOs high movability turn it into a mobile time-bomb. A recreation of this version is displayed above.
The GEKKO as a multi-purpose platform is one of the most interesting aspects of this model. Unlike previous mechs in the Metal Gear-franchise, the GEKKO does not fulfil one single utilitarian or narrative purpose. Instead, it is used in different environments and combat scenarios. It is quite an achievement to design a mech that is both so versatile and memorable and it allows artists to envision the GEKKO in situations and roles, which go beyond what is shown in the game. One such artwork is showcased below.
The Inuit tribe
based on concept art by Jakub Rozalski
For the 31st Anniversary of the Metal Gear-franchise, director Jordan Vogt-Roberts shared many new pieces of concept art created by many veteran artists. This image by Jakub Rozalski was one of them. It shows a GEKKO standing in the arctic amidst a group of indigenous people. It does not appear to be hostile nor friendly - instead, appearing like a natural occurrence while being completely artificial. It seems out of place while at the same time looking all too fitting. The dissonance and coalescence of nature and machine, which are incredibly well captured in Jakub's concept art, are what ultimately inspired me to recreate the GEKKO.
Because these motives are not only evoked by its relationship with the environment, but found in its own design. Even though the GEKKO is a machine, it not only bleeds like an animal, but also makes the noises of a cow and its steps sound like a trotting horse. Add to that the observation that it appears in a herd and exhibits animalistic movements and it becomes hard to tell where the flesh ends and the cold steel begins - a theme that is often explored in the Metal Gear games and is beautifully captured in this image.

A guide by ArmsTech Inc.
You can buy the instructions to recreate your own GEKKO here:
Buy instructions

Render of the finished model