Hideo Kojima and Yoji Shinkawa are considered legends in the industry for their work on the Metal Gear Solid series. The Zone of the Enders franchise, the only other series of games the two created at Konami, is however rarely mentioned. This is a shame, as the designs and aesthetics of ZOE are among the most unique and iconic designs ever to be found in a game.
Originally released in 2001 for the PS2, Zone of the Enders features a colonial war between Earth and Mars in the 22nd century. In the game, this conflict is fought with mechs called Orbital Frames; Jehuty being the Frame used by the player.
A sequel called Zone of the Enders: The 2nd Runner was released in 2003, seeing the return of Jehuty and expanding the ZOE universe. 15 years later, Konami launched a remake of that game, called Zone of the Enders: The 2nd Runner M∀RS, marking the first new ZOE release in over a century. To commemorate the launch, I collaborated with Konami Germany to recreate Jehuty in LEGO®.

Jehuty is among my favourite designs by Yoji Shinkawa. While the mechs of the MGS-franchise purposively look like they could exist in the world today, the Orbital Frames embrace a truly unbelievable Sci-Fi aesthetic. Their human-like posture as well as their clean surfaces give them an almost transcendent appearance. Their skinny and minimalistic shapes emphasise their roles as flying vehicles. And since they spend most of their time in the air, they lack real feet, giving the legs a delicate and graceful look.
The design of Jehuty has remained the same throughout the series except for its colour. In contrast to the version from the first game, which is mostly light blue and orange, the Jehuty in 2nd Runner is painted in grey and tan. This allows for the use of many different shapes, as those two LEGO® colours come in a wide variety of pieces. Especially the legs and shoulders benefited greatly from specific wedge-pieces, bringing the entire build closer to Shinkawa's organic design. To give Jehuty his humanoid shape and sleek texture, curved pieces from LEGO® large figure products (Part-ID 21562 and 26831) were used whenever possible. This helped to mitigate the blocky appearance that most LEGO® mechs normally have.
But the model was not intended to just be a statue, but rather a functional replication. Therefore the legs and arms are fully articulated. The head can turn, the boosters can fold in and the sword can be rotated into attack position. Giving Jehuty this level of mobility without exposing too much of the joints and structure was one of the key challenges during the design process. But the ability to replicate his poses and moves from the game was essential for an accurate depiction and worth the effort. 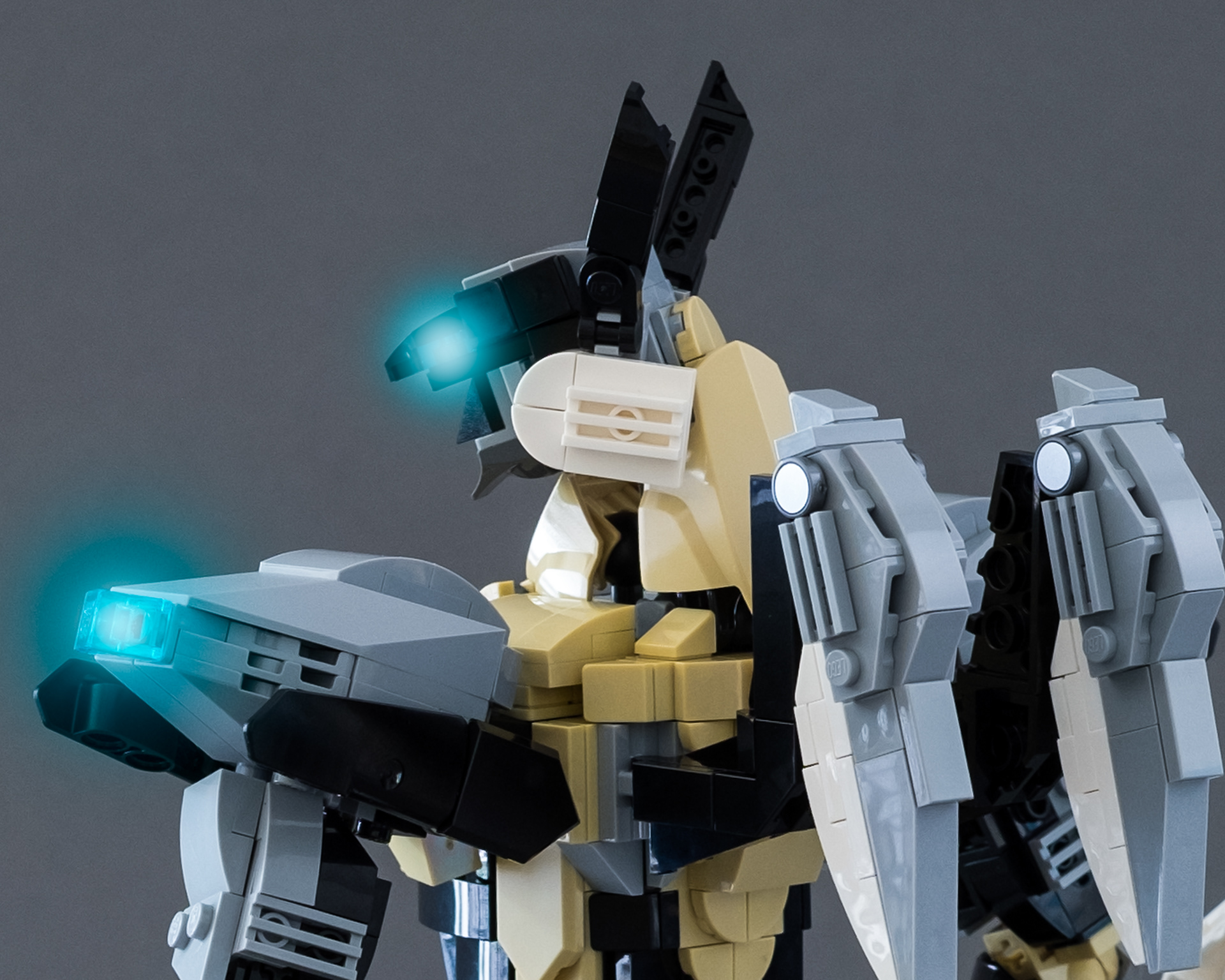 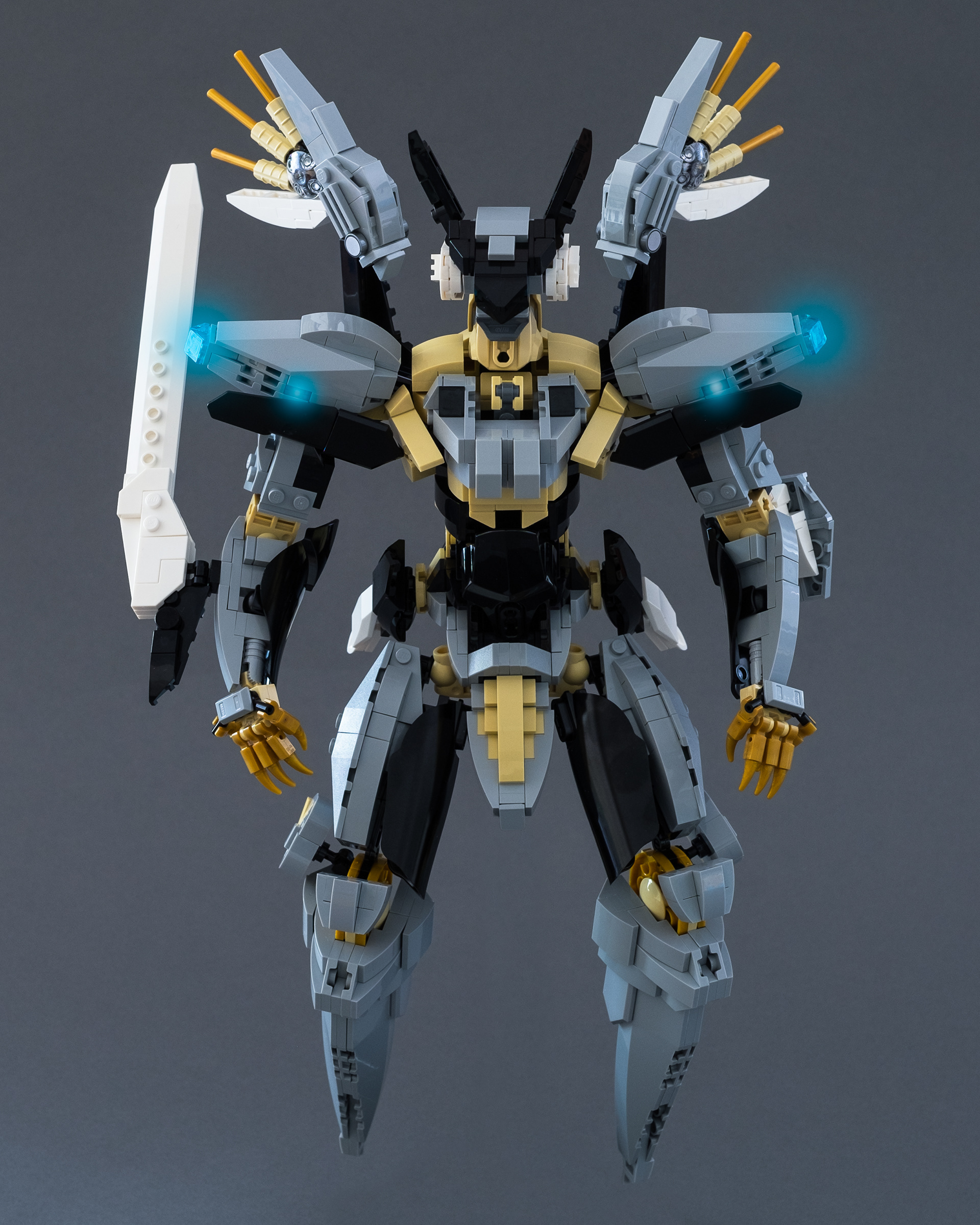 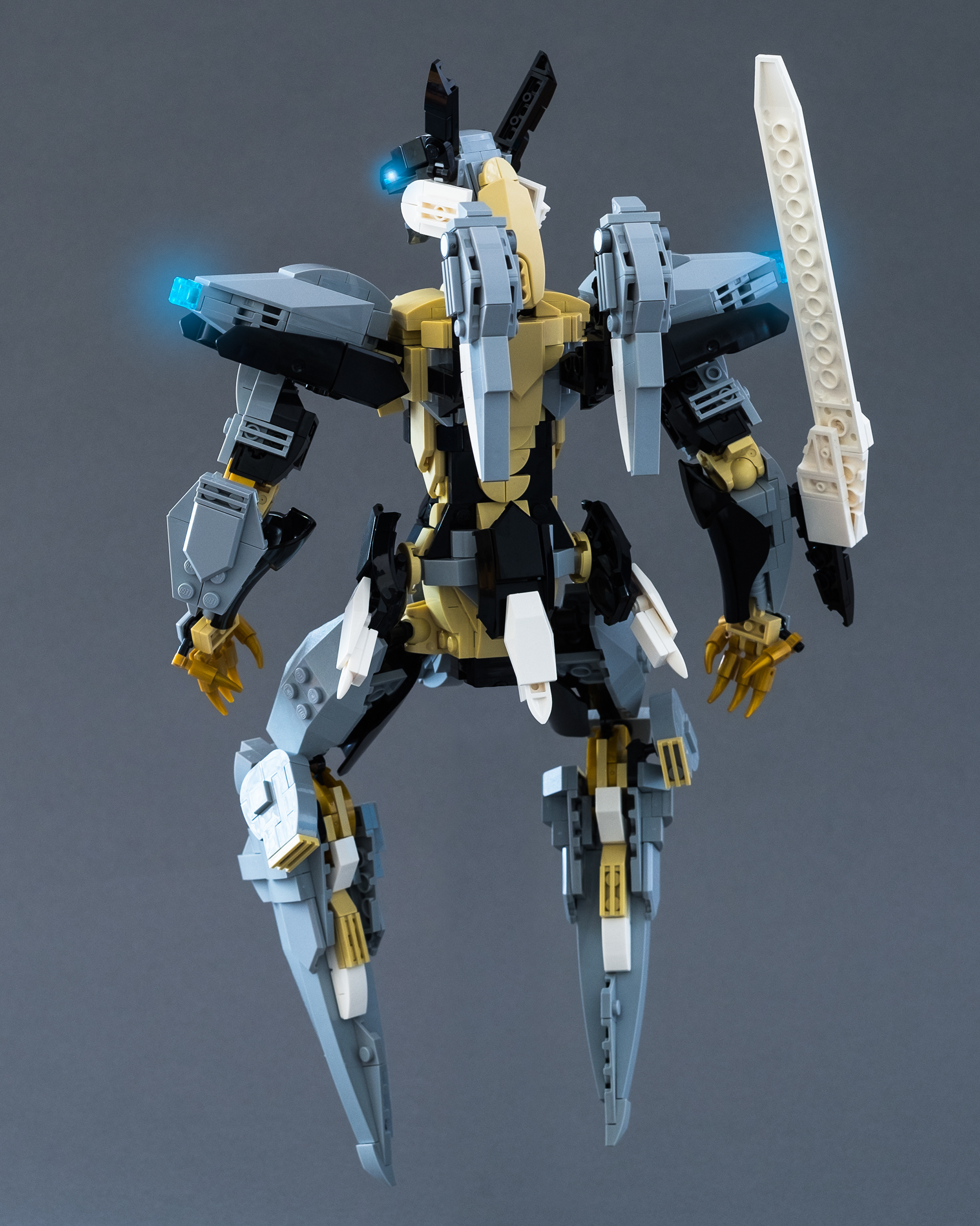 In addition to designing the model, I also made a time-lapse video of its assembly. I used said video to edit a complete trailer incorporating footage and music of the game. This video was then used by Konami for the marketing of Zone of the Enders: The 2nd Runner M∀RS.
To give fans the opportunity to build their own Jehuty, I also created fully illustrated instructions as well as a complete list of parts. Both can be downloaded for free from the Official Konami website.
Download the instructions
↑Back to Top

Insert copy here, which should vary depending on your region. Accept