"Old Vulgrim's got something new for you!"​​​​​​​
The game Darksiders was developed by Vigil Games, a studio established in 2005 by David Adams and Joe Madureira, and released in 2010. Some time after the sequel Darksiders 2 launched in 2012, the studio and its owner THQ went bankrupt and the studio was dissolved. Thankfully, the Darksiders franchise lives on: Now developed by Gunfire Games LLC, a studio also founded by Adams, and published by THQ Nordic, the third instalment of the series Darksiders 3 was released in 2018.
In collaboration with THQ Nordic, I got to design a brick-built replica inspired by the games to celebrate the return of the franchise. It was a relief to see a new Darksiders, since the games beg to have more sequels. One of the reasons is that the story follows the Four Horsemen of the Apocalypse after humanity has become extinct and a war between heaven and hell has broken out. Each game takes place during a similar period, but from the point of view of one of the Horsemen. The first one focused on War and the second one on Death, but we were still missing the other two. Luckily, Darksiders 3 filled some of the gaps by introducing Fury the first female Horsemen. Being the main character of the most recent game, Fury would have been the obvious choice for a LEGO® model, yet I decided to pick a different, more established character instead. 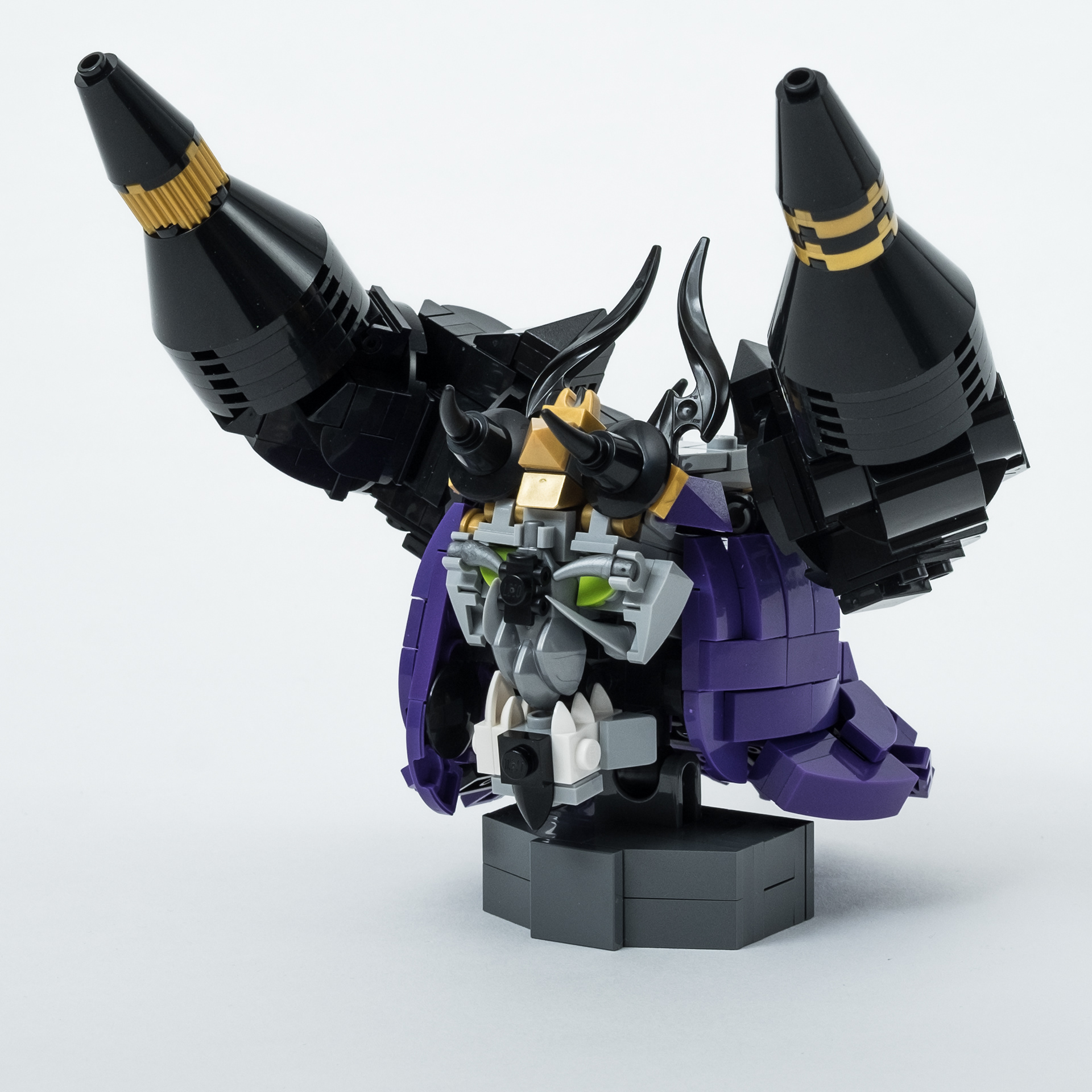 Let me introduce you to Vulgrim, the devious and cunning demon merchant. He has been a central part of each Darksiders game, but neither as a protagonist nor as an antagonist. Vulgrim has no allegiance to anyone, instead only seeking to get more souls of the dead. Feed him enough souls and Vulgrim helps the player in any way possible, from upgrading weapons and armour to using fast travel. In the aftermath of the apocalypse you come across more than enough souls to buy Vulgrim's support. Still, you never know what mischief Vulgrim is up to, which is why he is such a mysterious and beloved character.
"Feed my hunger and I'll feed your curiosity!"
Even though it is a small build the head is quite intricate and part-intensive, which you can appreciate in the time-lapse video above. The head is also a nice display piece in and of itself. Therefore I created step-by-step instructions which you can find on the official THQ Nordic website.
Having finished the head, I continued with the rest of the body. Because Vulgrim wears a long skirt and is always floating above the ground, the model has no legs. This allowed for a sturdy and continuous centre structure, which supports the entire built. This solved all stability concerns and offered a lot of freedom in tackling the rest of the model. I tried to differentiate between his exposed upper body and the clothes he wears by using different building styles. His body alternates between light bluish grey (Colour-ID 86), dark bluish grey (85) and flat silver (95) with many uneven and odd parts to replicate his heterogenous skin. Meanwhile, his sleeves, skirt and scarf are built in dark blue (63) with large parts and smooth surfaces to evoke a homogenous cloth look. 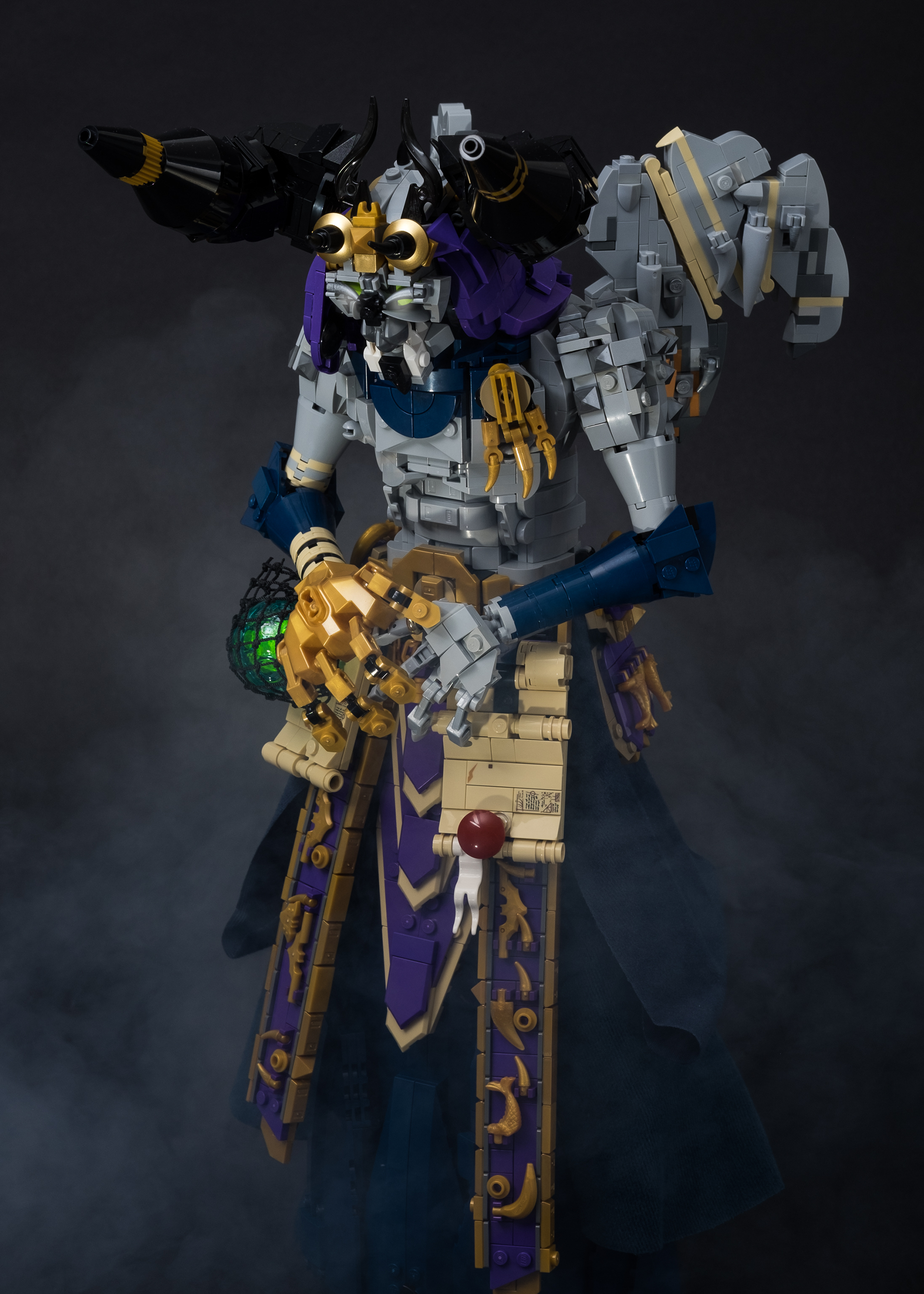 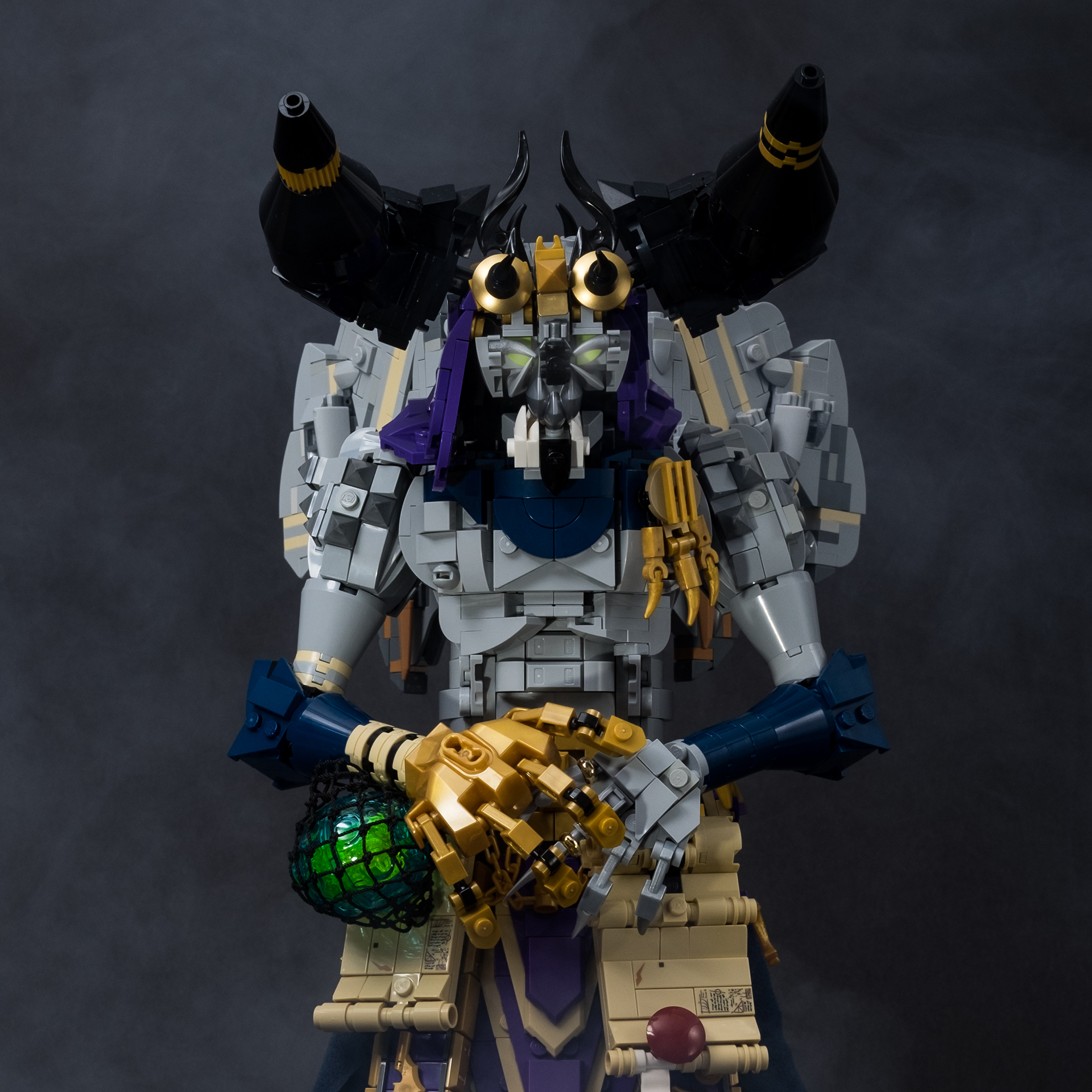 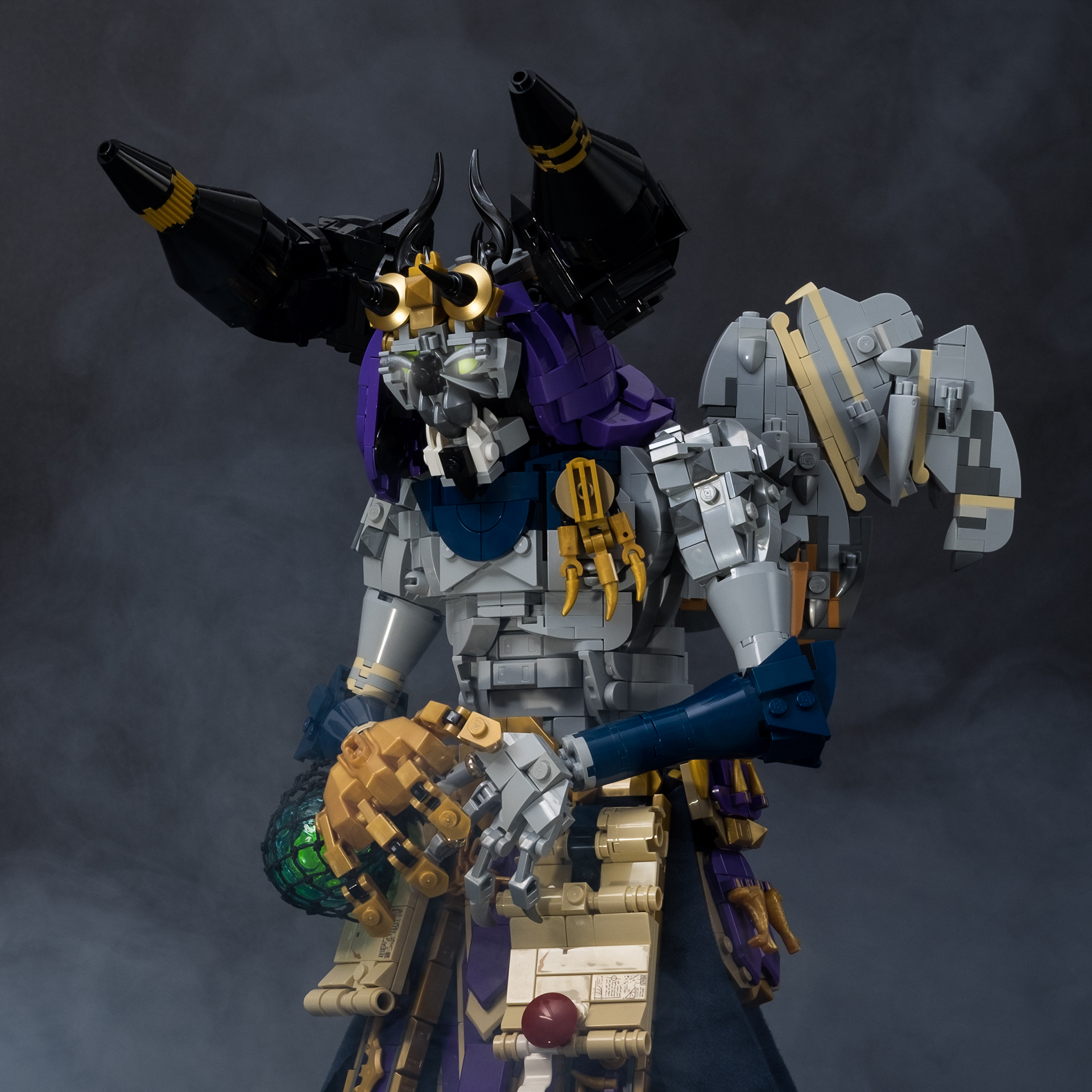 The glyphs at the front of the skirt were a highlight to design: A variety of pearl gold (Colour-ID 115) parts including bananas (Part-ID 33085), a fish (30224) and even Batarangs (37720c) were used to recreate the texture solely using LEGO® bricks. Similarly, the scrolls Vulgrim carries at his belt use official printed LEGO® pieces (3069bpb574) to mimic the text on them.
To give his skirt the same multilayer-appearance it has in the game, I used multiple dark blue capes (Part-ID 53415) found in the Knights Kingdom figures. In combination with the brick-built centre it gives the cloak a voluminous and noble look. The final step was the addition of his wings, which feature tan (Colour-ID 2) parts to replicate the bandages wrapped around them.
To present Vulgrim properly, I added some smoke to the pictures to mimc the way he emerges from a serpent hole. In the game Vulgrim only appears when you follow his signs to a small altar from which he ascends. Shrouded in mist, the demon merchant then asks humbly for a price in souls and once a deal is struck he disappears back into the depths, watching and waiting for the next offering.